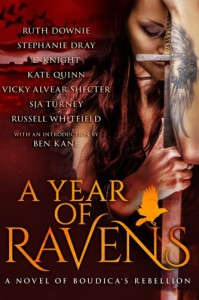 First line: We were both queens.

Set in 60 AD, this episodic novel follows the rebellion of Boudica and the native peoples of the UK against the Romans. Despite the fact that this book is penned by seven authors -- each chapter follows a different point of view -- this book has a cohesive feel, and the absolutely gutting story of Boudica, her daughters, and the Romans fighting against her are presented in raw, hard, and unapologetic prose.

I loved this book for all the reasons I adore historical fiction: it illuminated a foreign era for me and each author created a vibrant human I couldn't help but relate to (even if I didn't want to!). The arc of the story is chronological, but the story is pushed along by each new character. Previous characters aren't forgotten, but each -- whether Briton or Roman -- are articulated so well, I actually found my loyalties waffling! (And I say this as an unabashed Boudica fangirl!)

The participating authors are fabulous, and the writing here is top notch. There's enormous emotion, cinematic battles, and darkly hilarious moments to punctuate the gut-punching sorrow. The characters are deliciously wide ranging -- from queens to servant girl, Druid priest to lowly Roman soldier -- and I loved that I found myself viewing this conflict from 360 degrees.

The brutality of this campaign is presented unapologetic detail, which meant I was gasping, wincing, and squinting my eyes closed more than once. It very nearly verged on too gruesome for me but I appreciated that -- there's nothing whitewashed about war in this era. As I said, the characters are so fully realized that each time I thought -- oh, I'm for the Britons -- I'd find myself melting in sympathy toward the Romans. (Well, maybe not sympathy, but you know...)

This is a fav read for 2015, and another knockout for the H Team (the loose collection of historical fiction authors who are penning collaborative novels together). I never thought I'd be so devoted to the collaborative novel, but I'm already impatiently awaiting their next endeavor! 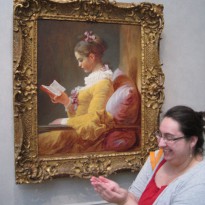