I'm Audra, a 30-something married lesbian. I love interesting heroines, gorgeous prose, place as character, and the occasional werewolf.
Tweet

A grey and steamy Friday here in Boston. And another few weeks without reviews -- shame on me! (Especially as I've sped through a number of great reads.) I'm going to try to catch up this weekend, but I find reviewing -- or at least, nailing down my thoughts on my reads -- a bit elusive these days. Exhausted is my new normal, and work is wildly crazy, and I just want to read if I have a few free moments.

But...the second half of my sabbatical begins next Tuesday (!) and I can't wait. My goal is to write a second draft of my historical novel, and having finished my fabulous writing class with the equally fabulous Tim Weed, I feel better equipped to do so successfully.

So, for the next seven weeks, I plan to bang out about 10K words a week, and see if I don't end up with a slightly less embarrassing draft.

I'd really been putting off this second draft because, and I'm embarrassed to admit it, I wasn't sure exactly how one created another draft of something. In school, I was a first-draft-is-the-final-product kind of girl, but I know that's not the best work I do. In the writing class, I learned a few techniques and styles for rewriting a draft, and I've been doing tiny prep work in anticipation of really diving in. (If you're curious, I clumsily summarize my novel at the end of this interview with Lynn Cullen, after she asked about it.) 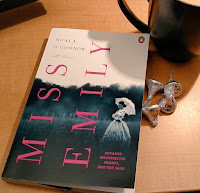 My reads this weekend are crazy ambitious, but in addition to writing, I hope to get a good chunk of reading done over sabbatical.

This morning I started Nuala O'Connor's Miss Emily and I know I'll finish it tonight -- it is that good, and that inhale-me-right-now readable. Yesterday I started Ta-Nehisi Coates' Between the World and Me which is gripping, but a less zippy read.

What are you reading this weekend?